S Since 1999, three-quarters of a million people have died from opioid overdoses in the U.S. alone. Opioid addiction is at epidemic proportions and has been exacerbated by the Coronavirus pandemic. Naltrexone and buprenorphine (sold under the Vivitrol and Sublocade brands) have been used to block the effects of opioids to treat addiction, but with limited effectiveness.

U.S. Patent No. 10,568,842 adds a steroid to naltrexone or buprenorphine preparations to create a longer-lasting Medication-Assisted Treatment (MAT) for opiate addiction. A continuation-in-part to this patent includes the addition of steroids to other long-acting preparations as well as steroid microcapsule preparations. Since all the ingredients in both formulations are each on their own FDA approved, approval for emergency use authorizations of the new formulation should be relatively routine and swift.

• “Opioid” is the catchall term for substances that bind to a group of receptors in the central nervous system called opioid receptors.

• Opioids are naturally occurring or synthetic (man-made). Your brain makes its own brand of opioids, called endorphins. Plant-derived opioids, called opiates, come from the seedpod of the Asian opium poppy plant. They include opium, morphine, and codeine.

What is opioids addiction? 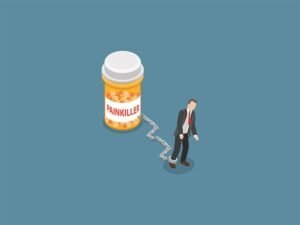 • Opioid addiction is a long-lasting (chronic) disease that can cause major health, social, and economic problems. Opioids are a class of drugs that act in the nervous system to produce feelings of pleasure and pain relief. Some opioids are legally prescribed by healthcare providers to manage severe and chronic pain. Commonly prescribed opioids include oxycodone, fentanyl, buprenorphine, methadone, oxymorphone, hydrocodone, codeine, and morphine. Some other opioids, such as heroin, are illegal drugs of abuse.

• Opioid addiction is characterized by a powerful, compulsive urge to use opioid drugs, even when they are no longer required medically. Opioids have a high potential for causing addiction in some people, even when the medications are prescribed appropriately and taken as directed. Many prescription opioids are misused or diverted to others. Individuals who become addicted may prioritize getting and using these drugs over other activities in their lives, often negatively impacting their professional and personal relationships. It is unknown why some people are more likely to become addicted than others.

• Opioids change the chemistry of the brain and lead to drug tolerance, which means that over time the dose needs to be increased to achieve the same effect. Taking opioids over a long period of time produces dependence, such that when people stop taking the drug, they have physical and psychological symptoms of withdrawal (such as muscle cramping, diarrhea, and anxiety). Dependence is not the same thing as addiction; although everyone who takes opioids for an extended period will become dependent, only a small percentage also experience the compulsive, continuing need for the drug that characterizes addiction.

• Opioid addiction can cause life-threatening health problems, including the risk of overdose. An overdose occurs when high doses of opioids cause breathing to slow or stop, leading to unconsciousness and death if the overdose is not treated immediately. Both legal and illegal opioids carry a risk of overdose if a person takes too much of the drug, or if opioids are combined with other drugs (particularly tranquilizers called benzodiazepines).