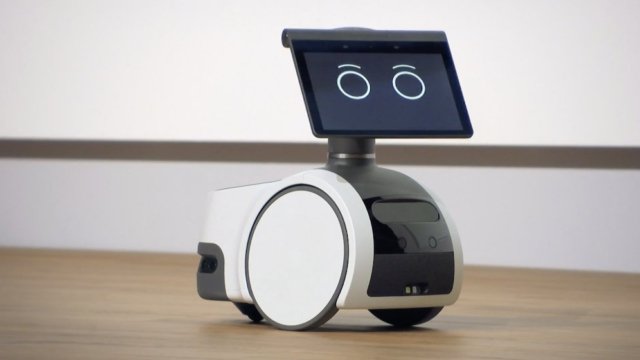 The company said it can be remote-controlled when not at home, to check on pets, people, or home security.

It can also patrol a home automatically and send owners a notification if it detects something unusual.

Amazon said it was more than “Alexa with wheels” and had been programmed with a range of movements and expressions to give it personality.

It demonstrated asking Astro to “beatbox” – and the robot bopped its head and made expressions while playing hip-hop beats.

It said Astro can be set with “out of bounds” zones, so it cannot go into certain areas, or could be set to “do not disturb”. It also features buttons to turn off cameras and microphones – though it loses its ability to move around when they are switched off.

The small robot also comes equipped with an extendable “periscope” camera that pops up from its head. Amazon showed an example of using it to check if a gas hob had been left on after leaving the house.

“Astro is a bold move by Amazon, but a logical step given its expertise in robots and desire to become more integrated into consumers’ daily lives,”said Ben Wood, chief analyst at CCS Insight.

Unlike some rivals, Amazon “is willing to bring highly experimental products to market” and see how customers react, he said.

“Offering products resembling something from a science fiction novel positions Amazon as an innovative company in the eyes of consumers and investors,” he said.

The robot will ship later this year, Amazon said – but only in the US. And after the initial, limited run, its price will go up to $1,449.99, it said.

“I believe the Astro robot will sell out in minutes when it becomes available in the US market,” Mr Wood said. “I’m just gutted that it won’t be shipping in the UK in the foreseeable future.”