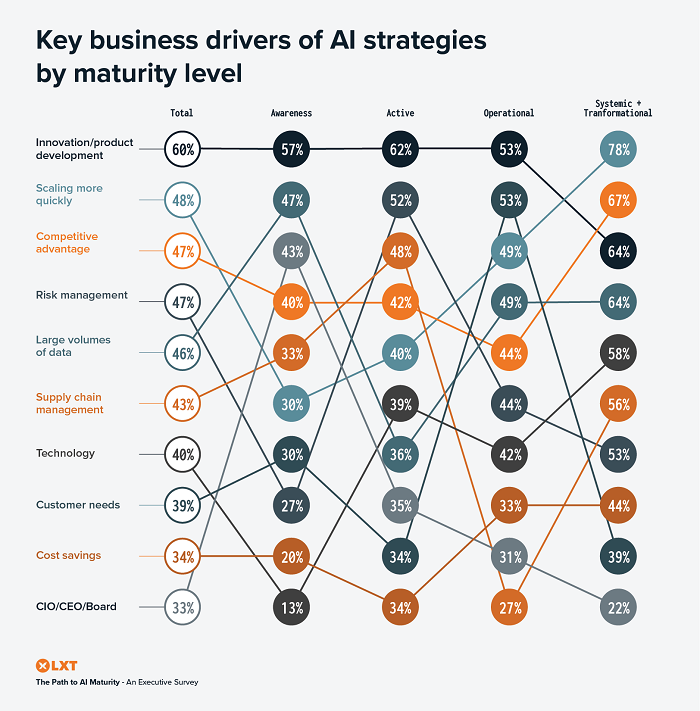 Earlier this year, we introduced our first executive survey, The Path to AI Maturity. The report highlights that investment in artificial intelligence is strong at mid-to-large US organizations, and 40% rate themselves at the three highest levels of AI maturity, having achieved operational to transformative implementations.

The new survey by research firm Reputation Leaders included 200 senior executives (two-thirds C-suite) with AI experience at companies with annual revenue of over $100 million and more than 500 employees – and details the impact that AI investment is having across organizations of varying revenue levels and industries.

As part of the survey, executives placed their companies on the Gartner AI Maturity Model. By asking participants to tell us where their organization stands, we were able to identify interesting aspects around the notion of AI maturity, particularly as it relates to those still in the theory (experimentation) stage versus the practice (operational or production) stage.

Some findings confirmed common hypotheses around AI investment and its correlation to revenue. For example, the survey reports that over a third of high revenue companies are spending between $51-100 million on AI and that overall, seven in ten organizations are spending $1 million or more of their budget on AI. We expected that revenue would correlate with investment and that a growing number of companies are generally investing in AI.

Others were more surprising. For example, while it was widely understood that AI brings efficiency and productivity gains and that enterprises are using AI to innovate, scale up, and drive competitive advantage, meeting customer needs was not perceived as a compelling driver of AI investment, compared to others presented to the respondents.

More than 40% of organizations have reached high levels of maturity, from Operational (AI in production, creating value) to Transformational (AI is part of business DNA) status. To get there, a quarter of maturing organizations are spending $51 million or more on AI, compared to just 8% of Experimenters.

Across all organizations, we are still in the early stages of AI maturity

Despite rapid adoption and a growing feeling of ubiquity, it seems clear that collectively we remain in the early stages of AI maturity. While we only surveyed individuals from larger-scale enterprises with demonstrated interest and investment in AI, 60% can still be characterized as Experimenters and just 6% fall into the most advanced category of being at the Transformational stage.

There is a long way to go before the potential of AI to achieve the aims highlighted in the survey is realized, and those benefits are achieved at the Operational or Transformational stages.

There were clear, but arguably easily explained, differences in the priorities reported across industry verticals. In financial services, the ability of AI to improve analytics rose to the top. For all other industries, efficiency and productivity gains were key. For the retail/e-commerce industry, speeding time to market was the second-most important benefit reported.

Experimenters are largely focused on driving innovation, and maturing companies by scaling up

As for business drivers, those at the very early (or theory) stages of their AI journey are focused on driving innovation and managing large volumes of data. Businesses that have reached the practice levels of AI maturity transition their focus to scaling more quickly and driving growth. Similarly, these businesses are looking to optimize these applications to gain a competitive advantage.

Another key theory versus practice divide is the correlation between AI maturity and the perception of quality AI training data as a key contributor to success. At the Awareness stage, this number was reported at 27% versus 44% at the Operational stage and 61% at the Systemic + Transformational stage. As we see below, this translated into specific operational benefits, which were rated more highly by those companies at the more mature stages.

A third, and particularly telling, the difference is that those at the more advanced stages of maturity report the benefits of quality training data at a higher level on almost every parameter. It seems that their hopes were surpassed by the results they saw in operational AI applications. As more companies reach AI maturity, these gains may continue to increase.

Lastly, a finding that seemed unsurprising in its direction, but remarkable in its extent concerned the need for data. Only one respondent out of two hundred expressed the view that the need for AI training data would decrease over the next five years.

In light of the context stated earlier – that the survey addressed individuals and organizations that had to some extent bought into the AI story – I expected this finding, but its emphatic nature suggests that there is awareness across all levels of institutional AI maturity, that the maturity of the technology itself remains nascent. The evolution of AI technology, with the support of high-quality training data, should only continue to accelerate.

In other words, there is still significant innovation to be achieved, and we will all play our part in reaching the full promise of AI maturity, only just glimpsed today.