As chances for diplomacy with Russia dwindle, Ukraine declares a state of emergency -
3667
post-template-default,single,single-post,postid-3667,single-format-standard,bridge-core-2.6.5,qode-news-3.0.2,qode-page-transition-enabled,ajax_fade,page_not_loaded,qode-page-loading-effect-enabled,,qode_grid_1400,footer_responsive_adv,hide_top_bar_on_mobile_header,qode-content-sidebar-responsive,qode-theme-ver-25.0,qode-theme-bridge,qode_header_in_grid,wpb-js-composer js-comp-ver-6.5.0,vc_responsive,elementor-default,elementor-kit-344

As chances for diplomacy with Russia dwindle, Ukraine declares a state of emergency 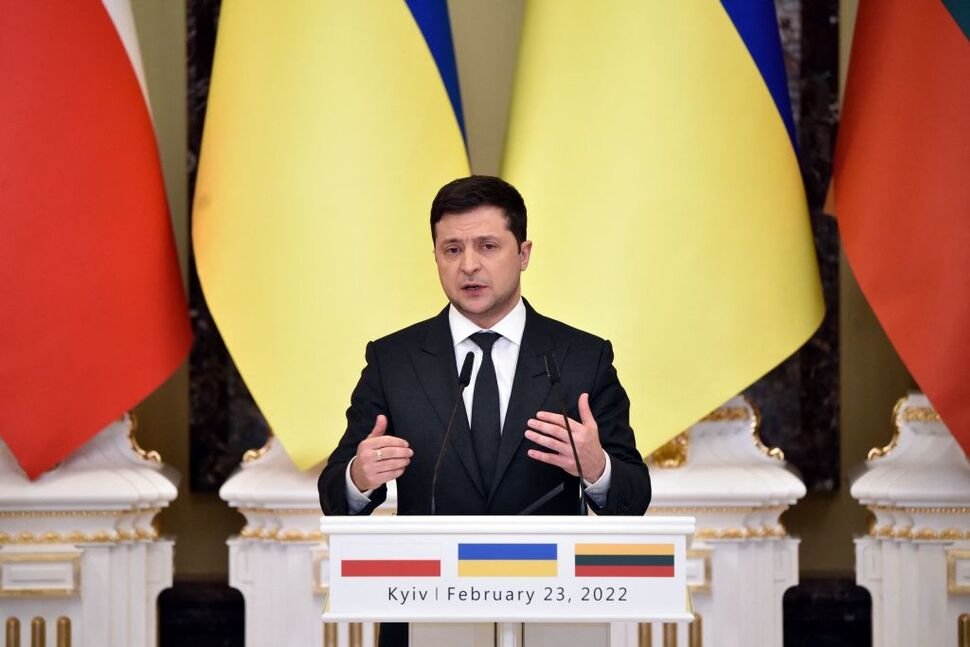 As chances for diplomacy with Russia dwindle, Ukraine declares a state of emergency

TThe Ukraine government declared a state of emergency on Wednesday, yet another sign that Ukrainians are bracing for conflict as Russian aggression continues on the border and the chances for diplomacy dwindle.

The order – recommended during a Wednesday meeting of the National Security and Defense Council and pending approval by the Verkhovna Rada, Ukraine’s parliament – does not cover the Russian-backed breakaway regions of Donetsk and Luhansk, both located in the disputed Donbas area, after Russian President Vladimir Putin recognized them as “independent” people’s republics on Monday and ordered troops there.

The declaration came as a new massive cyberattack hit several Ukrainian websites on Wednesday, CNBC and other outlets reported. The source was not yet confirmed, but it followed another cyberattack that hit Ukraine last week.

“Neither the United States nor Ukraine can afford to miss the forest through the trees,” Melissa Griffith, a senior program associate with The Wilson Center’s Science and Technology Innovation Program, said in a statement. “Cyber operations – including the recent wave of [distributed denial-of-service] attacks – are just one element of a much larger and pressing set of national security concerns. The consequences from a land war are far graver than any cyber operation Russia has carried out or may carry out in the future.”

A diplomatic breakthrough is looking less and less likely. Secretary of State Antony Blinken on Tuesday announced that he canceled his meeting with Russian Foreign Minister Sergey Lavrov, which was scheduled to happen on Thursday. The secretary said the plans were scrapped – in consultation with allies – because an “invasion is beginning and Russia has made clear its wholesale rejection of diplomacy.” A proposed summit between President Joe Biden and Putin is also unlikely to move forward, with a senior administration official telling reporters on Monday that the White House “certainly can’t commit to a meeting that has as a predicate that Russia won’t take military action when it looks as imminently like they will.”

Biden, who has been addressing the nation about the crisis in Eastern Europe more frequently, announced on Tuesday a series of sanctions against Russian financial institutions and the country’s elites. More could come if Russia further invades Ukraine, the president threatened, and he followed through by announcing on Wednesday order of sanctions against the Nord Stream 2 pipeline company and its corporate officers. Germany had already announced it would halt certification of the project due to Russia’s actions.

Putin himself made his demands – “so that we can live in peace, so that there is no talk of any conflicts, especially armed,” according to a Kremlin translation – direct in comments to reporters on Tuesday. The Russian president said he needed to see the world recognize the will of the people living in Crimea and Sevastopol, Ukraine drop its bid for NATO membership, and a “certain degree of demilitarization of today’s Ukraine.”

“Is it possible and should all issues be resolved with the help of force or remain on the side of good? Well, why do you think that good should always be powerless?” Putin said. “I don’t think so. I think that just good implies the ability to defend oneself. From this, we will proceed.”

Meanwhile, the Pentagon announced that it will move some U.S. troops further east to “stand shoulder to shoulder with our Allies to maintain security and stability in Europe” if deterrence fails. The repositioning includes about 5,000 troops being deployed from the U.S. to Poland and Germany, and a Stryker squadron of approximately 1,000 service members moving from Germany to Romania.