Early childhood education was ravaged by the pandemic -
3084
post-template-default,single,single-post,postid-3084,single-format-standard,bridge-core-2.6.5,qode-news-3.0.2,qode-page-transition-enabled,ajax_fade,page_not_loaded,qode-page-loading-effect-enabled,,qode_grid_1400,footer_responsive_adv,hide_top_bar_on_mobile_header,qode-content-sidebar-responsive,qode-theme-ver-25.0,qode-theme-bridge,qode_header_in_grid,wpb-js-composer js-comp-ver-6.5.0,vc_responsive,elementor-default,elementor-kit-344

Early childhood education was ravaged by the pandemic 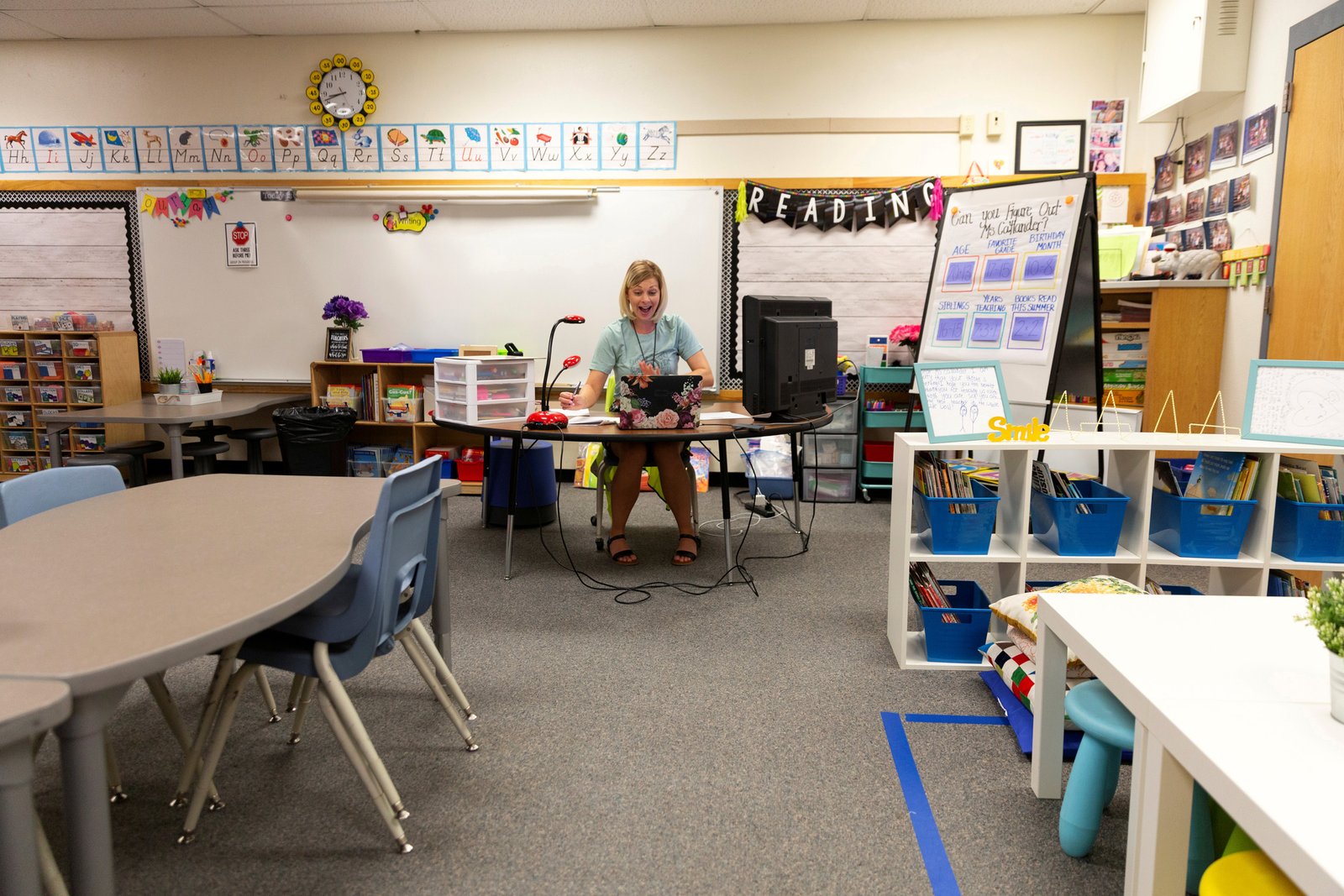 Early childhood education was ravaged by the pandemic

TThe coronavirus pandemic wiped out a decade of progress in increasing preschool enrollment – slashing care for more than a quarter-million children – even as it led to major decreases in state investment and made it nearly impossible for operators to meet best practices.

While child care and preschool operators, teachers, and parents have long lamented the pandemic’s impact on the early education system in the U.S. – one already rife with long-standing challenges surrounding access, cost, and quality – a new assessment of state-funded care for 3- and 4-year-olds shows just how precarious the system is.

“For the first time in at least 20 years, enrollment in state-funded preschool declined and the pandemic erased an entire decade of progress in preschool enrollment,” he said. “Challenges such as health risks closed classrooms, and remote classrooms disrupted an already fragile system.”

The 2021 State of Preschool report, published Tuesday by the institute, documents the impact of the pandemic on early education programs provided during the 2020-2021 school year, the first school year to be fully impacted by the COVID-19 disruptions.

Among other things, the report shows that enrollment in state-funded preschools dropped for the first time in 20 years, erasing a decade of growth and resulting in a decline of nearly 20%, or 300,000 children, in a single year. The greatest negative impact was on children from low-income families and racial and ethnic minorities.

Prior to the pandemic, six states – Florida, Iowa, Oklahoma, Vermont, West Virginia, and Wisconsin – along with Washington, D.C., were serving at least 70% of 4-year-olds, and seven other states were in striking distance of hitting that same goal. Only Washington, which operates a universal prekindergarten program as part of its public school system, managed to maintain those high rates of enrollment, serving 84% of 4-year-olds and 64% of 3-year-olds.

In total, 26 states reduced spending on early education – a decrease of $254 million compared to the prior year. However, due to $440 million in federal COVID-19 aid, nine states were able to increase spending on preschool by more than $10 million, led by Maryland with an $84 million increase and New Jersey with a $78 million increase.

“Many of us know how the pandemic set us back,” Health and Human Secretary Xavier Becerra said in a call with reporters. “It is critical that we learn from what the pandemic has taught us to move forward.”

“We know that things aren’t where they should be,” he said. “This is a time when we need to move.”

Even before the pandemic, the sector was reeling from a multi-pronged problem: It’s unaffordable for most families. Average child care in Washington, D.C., for example, costs roughly $25,000 a year – and it pays workers far too little pay for the scope of work, degrees, and certifications that are required for employment. The average hourly wage of a child care worker in the nation’s capital, by comparison, is $18, according to the Bureau of Labor Statistics.

Nationally, the workforce is still 12% below pre-pandemic levels, with workers being wooed away by companies like Amazon that are offering hourly wages well above what the average child care worker currently makes, as well as other benefits like health care and tuition assistance. The problem was so acute in Washington, D.C., that local officials recently approved a plan to give childcare workers one-time payments between $10,000 to $14,000 to boost their salaries.

Complicating the landscape further, with children under 5 not yet eligible for vaccinations, child care centers are still being forced to shut down for days at a time as staffers filter in and out of quarantines and isolations.

The last three years have taken a toll on the industry: According to a new report published this month by Child Care Aware of America, nearly 16,000 child care programs across 37 states have permanently closed since the pandemic began – a 9% decline in the number of licensed child care providers.

The volatility of the sector has even contributed to women’s ability to maintain employment during the pandemic. In the first few months of the pandemic, roughly 3.5 million mothers with school-age children either lost their job, took a leave of absence, or left the labor market altogether, according to an analysis by the Census Bureau. A year later, 1.3 million were still locked out of the labor force.

While women have clawed back lost work, a concerning gender gap remains.

The most recent analysis of data from the Bureau of Labor Statistics Job Openings and Labor Turnover Survey performed by Gusto in February, which has been analyzing quit rates by gender since January 2020, shows that the gender gap in quit rates rose in January 2022, with 4.1% of women quitting their job compared to 3.4% of men. The increase was the first documented since August 2021.

With Congress back from recess this week, early education advocates plan to lobby members to revive the $400 billion child care and the pre-kindergarten proposal included in the $1.75 trillion Build Back Better package.

But the ability of Congress to deliver is not in their favor.

While Democrats are intent on peeling off one or two major policy proposals housed within the Build Back Better proposal to try to pass as standalone measures, they’re still negotiating within their own caucus to identify which policies to push forward. And even though boosting funding for child care has long been a bipartisan issue, especially at the state and local level, it’s virtually a nonstarter for Republicans in Congress who are loath to support a major new national initiative.

Republicans would prefer to increase funding for the long-standing Child Care Development Block Grant, a federal program that provinces aid states with child care subsidies for low-income families with children under age 13. It’s currently funded at $5.8 billion per year.

Any significant federal investment would be noteworthy for a service long considered a blight on the country’s education system. When it comes to early education – both child care and pre-kindergarten – the U.S. is dwarfed by the types of services and access other industrialized countries provide for families.

In fact, out of 41 industrialized nations, the U.S. ranked fourth to last in the percentage of children 3-5 years old enrolled in early childhood education, according to a report released last year by the Organization for Economic Cooperation and Development. Only Costa Rica, Switzerland, Turkey, and Saudi Arabia trail the U.S., which has an enrollment rate of 65%. More than half of the countries in the analysis enroll upward of 90% of their children 3-5 years old.

If Congress isn’t able to approve a broad package, as was originally envisioned in the Build Back Better proposal, a small matching grants program could greatly accelerate progress, the report shows. For example, a five-year commitment of just $1 billion in the first year, with another $1 billion added each year up to $5 billion in the fifth year, could increase enrollment in high-quality programs by 1 million children over those five years.

Underscoring the negative impact the pandemic had on early education programs in the U.S., the report shows that even if states recuperate from losses due to the pandemic and return to prior enrollment growth rates, states are likely to enroll just 40% of 4-year-olds and 8% of 3-year-olds 10 years from now.

“Preschool should be available for everyone,” Education Secretary Miguel Cardona said on a call with reporters. “But right now it’s not.”

“Even if we fully rebounded we’re not where we need to be,” Cardona said. “It’s unacceptable to just go back to where we were.”