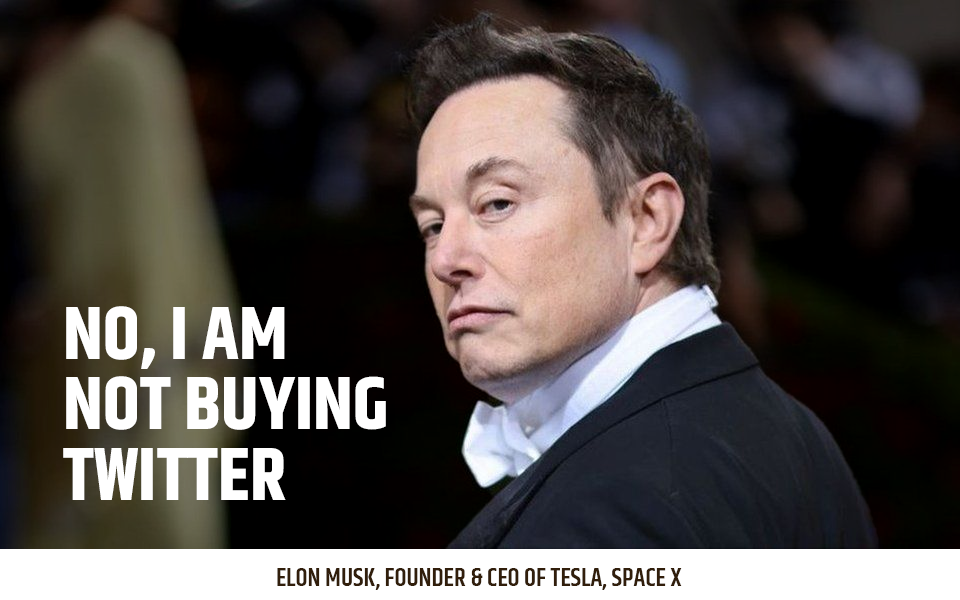 The answer is no: Elon Musk won’t buy Twitter.

According to reports, the (current) richest person in the world terminated his painfully drawn-out attempt to buy his favorite social media site, citing “material breach of multiple provisions of the Agreement.”. This follows his previous declaration that the deal was on hold.

The owner of SpaceX and CEO of Tesla will not buy the rest of Twitter for $44 billion, but he will still own a significant chunk of it. A few months later, Musk announced his plans to take the company private by swallowing up the rest of its shares, making him the largest individual shareholder. In other words, if the deal had gone through, Elon Musk’s private company would have been in place instead of a publicly traded corporation owned in large part by Elon Musk.

In recent months, Musk had criticized Twitter’s moderation policies, and his announcement that he wanted to buy it came with promises to address issues with Twitter’s algorithm and protect free speech. Moreover, he was willing to let former President Donald Trump rejoin the platform if he wanted to.

A $1 billion fee may be charged by the SEC to Musk for withdrawing from the deal, according to his purchase agreement. No word yet on whether the government will ever be able to extract that money.

So if Elon Musk has no good reason to walk away from the deal — and I think he obviously does not, though he’ll argue otherwise in court — and Twitter sues him for damages, it can’t get more than $1 billion. Its actual expectation damages are something like $24 billion. The capped damages are nowhere close to enough to compensate Twitter for the lost deal.

Twitter has a better option. It can sue for specific performance, and ask a Delaware judge to order Musk to pay, not $1 billion or $24 billion, but the whole $44 billion to actually close the deal and buy Twitter. This is more fraught and complicated than suing for damages; specific performance is not the most normal remedy in contract law, and for reasons we discussed on Saturday there are lots of reasons that it might be particularly difficult here. Forcing a guy to buy a company that he doesn’t want is a very drastic move, and nobody really wants to do it. But the merger agreement does say that Twitter is entitled to specific performance of Musk’s obligations and that each party “agrees that it will not oppose the granting of an injunction, specific performance, and other equitable relief on the basis that any other party has an adequate remedy at law or that any award of specific performance is not an appropriate remedy for any reason at law or in equity.”

And so, if this dispute ends up in court, there are three things that the court can do:

Stay Tuned this story is updating.