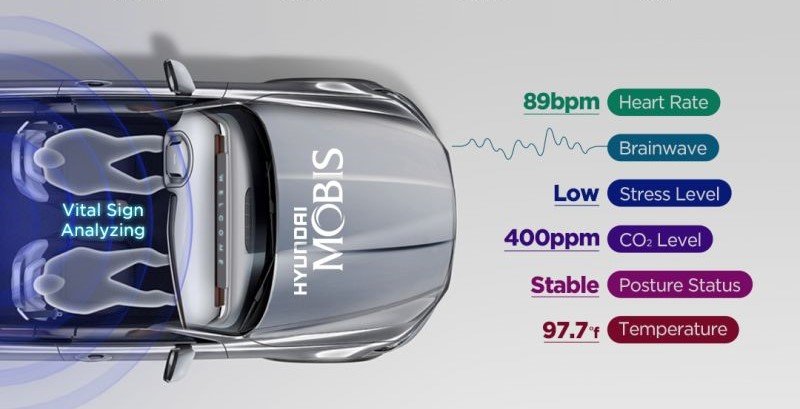 HHyundai Mobis has unveiled pioneering new tech that monitors the vital signs of a driver’s health.

The company – one of the world’s leading automotive component suppliers and part of the Hyundai Motor Group – has developed a new Smart Cabin Controller that analyzes elements such as posture, heart rate, and brainwaves.

And if the controller detects any serious issues, or that the driver is suffering from undue stress, it can switch a vehicle to autonomous driving to maintain safety. In the future, it’s claimed it could even prevent drunk driving.

While there are already controllers available in the mobility industry capable of processing specific vital signs, Hyundai Mobis says this is the first time dedicated health care tech has been developed that can perform an integrated analysis of various different ones.

In effect, the company claims, it works almost like an advanced “brain,” turning cars into “mobile health check centers” and putting a focus on occupants’ well-being to deliver safety, rather than concentrating exclusively on vehicle performance.

The Smart Cabin Controller works via four sensors. First, there’s a 3D camera that captures the posture of occupants. There’s also an ECG sensor mounted on the steering wheel, plus an ear-set sensor to measure the brainwaves flowing around the ears. And finally, there is an HVAC (heating, ventilation, and air-conditioning) sensor to measure the temperature, humidity, and carbon dioxide level of the cabin.

All the data supplied by these sensors is analyzed in real-time, and the controller takes action accordingly if any warning signs are detected.

For example, switching to autonomous driving mode is recommended if the ECG sensor detects high-stress levels in the driver. Alternatively, the controller can open windows if the carbon dioxide level is too high or switch to a different mode of air circulation.

In the future, the technology is expected to evolve even further and have the capability to guide a vehicle to a hospital in the case of a serious medical issue, such as a cardiac arrest.

Cheon Jae-Seung, head of research and development at Hyundai Mobis, hailed the significance of the tech and pledged there was more to come.

“Our core competitive edge is the software solution that has been designed to apply health care to mobility and the controller that enables integrated control,” Jae-Seung said. “Based on the unique vital signs database we’ve built up, we will upgrade this technology further to provide more features, including car sickness prevention, stress management, and the blocking of drunk driving.”

There is no word yet when the Smart Cabin Controller is likely to appear in production vehicles.