Infections of the Coronavirus plateau at 100,000 per day in the United States -
4167
post-template-default,single,single-post,postid-4167,single-format-standard,bridge-core-2.6.5,qode-news-3.0.2,qode-page-transition-enabled,ajax_fade,page_not_loaded,qode-page-loading-effect-enabled,,qode_grid_1400,footer_responsive_adv,hide_top_bar_on_mobile_header,qode-content-sidebar-responsive,qode-theme-ver-25.0,qode-theme-bridge,qode_header_in_grid,wpb-js-composer js-comp-ver-6.5.0,vc_responsive,elementor-default,elementor-kit-344

Infections of the Coronavirus plateau at 100,000 per day in the United States 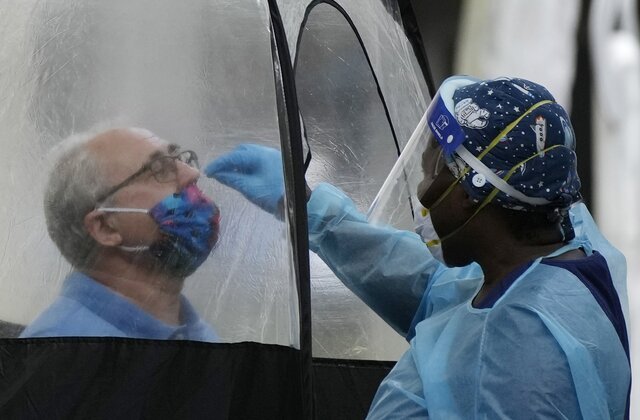 Infections of the Coronavirus plateau at 100,000 per day in the United States

CCoronavirus cases in the U.S. have plateaued at around 100,000 new daily infections on average for the last month or so, according to data from the Centers for Disease Control and Prevention. While the number is significantly less than what was reported during previous surges – for example, the average of new daily infections was over 800,000 during the peak of the omicron wave in January – it’s still much higher than previous lulls. Daily infections dropped down to fewer than 25,000 on average in March after the omicron surge before picking up again. Federal officials insist the U.S. is in a better place now than it has access to vaccines and therapeutics. But that outlook has possibly come with a downside, as Congress shows little appetite or urgency to approve more COVID-19 funding that the Biden administration says is needed to prepare for potential fall and winter surges.

But the White House conceded recently that funds from Congress aren’t likely anytime soon, instead opting to repurpose money it already had. The decision means that testing and stockpiling protective equipment will fall by the wayside while funds are diverted to coronavirus vaccines and treatments instead.

“These are very, very difficult choices,” Jha said. “This is not where we should be in the pandemic.”

Even with the move, the White House said that it will not have the “resources needed to secure enough vaccines for all Americans who may want them this fall.”However, the U.S. could face problems sooner than that. Some experts are warning of a coronavirus surge in Southern states during the summer, given that the region has seen waves the previous two summers. According to data from Johns Hopkins University, several Southern states are currently seeing coronavirus cases increase, including Georgia, Alabama, and South Carolina

Meanwhile, new omicron subvariants have started spreading across the country. BA.4 and BA.5, which were first reported in South Africa, were responsible for over 20% of new coronavirus cases in the U.S. last week, according to CDC data.

The subvariants are not necessarily expected to lead to a substantial increase in hospitalizations or deaths as they don’t show signs yet of causing more severe disease, but experts warn the highly transmissible strains could lead to an uptick in infections or, at the very least, a longer plateau for the latest coronavirus wave. And as the virus spreads, it has more opportunities to mutate into possibly more destructive variants that could upend mitigation strategies that have proven to work so far.