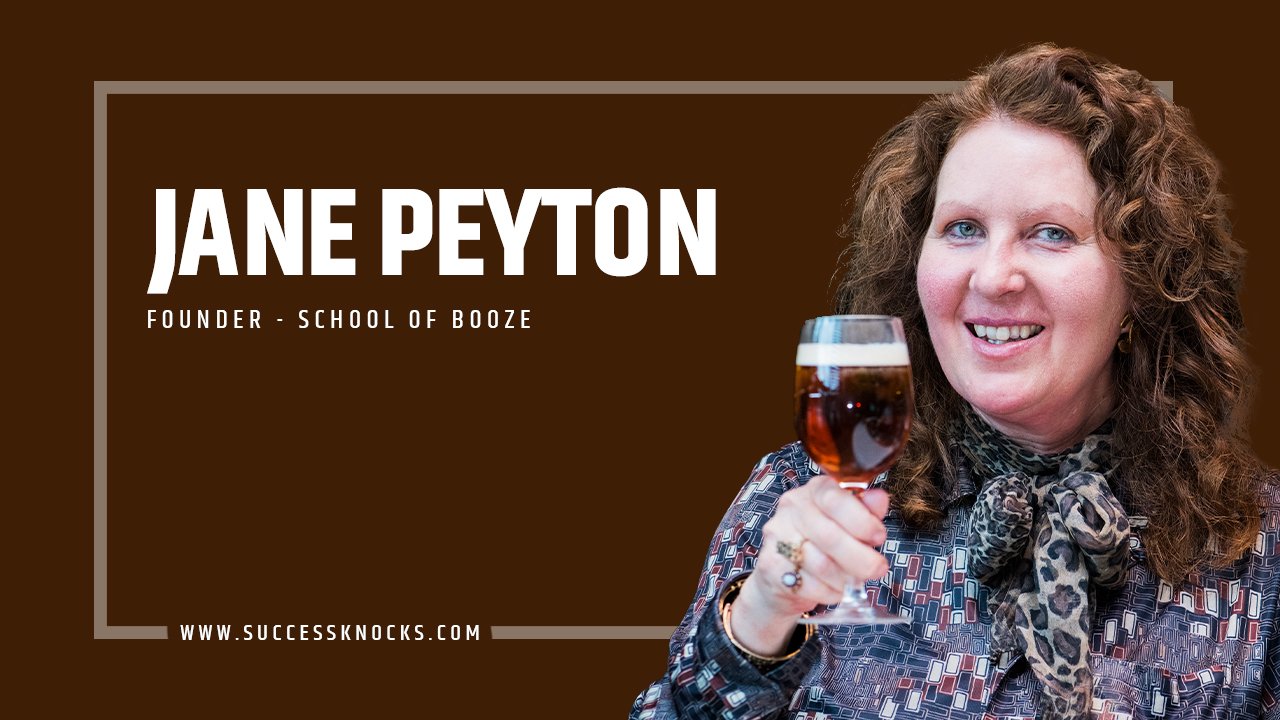 When I was a child I wanted to be a teacher.  Little did I know that as an adult my wish would come true with a specialist subject of alcoholic drinks!  After careers as a producer of TV documentaries, journalism, and copywriting, in 2008 I founded a company in which I could use my personal and professional skills combined with things I really enjoy doing and make a living from them. To help me work out just what that business would be I drew a Venn diagram. The three circles contained phrases including sociability, production skills, public speaking, teaching, confidence, visiting pubs, beer, wine, and more.  Where they intersected it was clear that the way to combine everything was to establish the School of Booze.

Initially, School of Booze was a corporate events company offering enlightening and entertaining tutored tastings, specializing in beer, cider, and wine tasting.  No other events businesses were offering beer or cider tasting in the way that I did so for years I had the monopoly.

As the saying goes, every day is a school day and I have a yearn to learn so I assumed that other people would too.  The registered trademark of School of Booze is ‘Think While You Drink’ and that was the intention, for people to think about what they were drinking, the aroma, flavor, texture, and drinking experience.  I also wanted people to think about how magical an alcoholic drink is, which starts off as a food source such as cereal, apples, grapes, honey, and is transformed by the supernatural process of fermentation into the intoxicating liquid in their glass.

Before I started School of Booze I became accredited through the Wine & Spirit Education Trust.  At the time professional beer and cider education were not available so I used the principles I learned with wine and adapted them to beer and cider. Later I became an accredited beer sommelier (winning the title of Britain’s first Beer Sommelier Of The Year, and Drinks Educator of the Year), and also became Britain’s first accredited cider sommelier.   Not many people realize that the word ‘sommelier’ is not restricted to the wine profession so when they learn that I am a sommelier in beer and cider they are invariably surprised, and it starts a conversation with me being able to rhapsodize about beer and cider and explain the myriad subjects there are about both which deserve to be celebrated with recognized academic qualifications.

Don’t Use The Word Booze In Your Company Name!

‘No-one will take you seriously if you use the word booze in your company name,’ I was cautioned by more than one businessperson. I had several reasons for not taking their advice including that there is no other collective noun for alcoholic drinks, the name describes succinctly what the company offers, and I do not want the type of client that does not think the phrase School of Booze is amusing.  Fortunately, I was right, the name is memorable, it makes people laugh and attracts the customers I want. My first booking was from an international law firm, and very quickly my client roster grew to include some of the world’s best-known brands including Apple, Deutsche Bank, Yahoo, Discovery Channels, Honda, and hundreds more in a variety of sectors.

School of Booze is London (UK) based but we do not have a brick and mortar venue. Instead, we host events in places such as hotels, stately homes, and river cruises. Among memorable locations, I have hosted events in is the barrel-vaulted 15th-century cellar once used to store King Henry VIII’s wine collection, and Fulham Palace, formerly the home of the Bishop of London and where Queen Elizabeth I regularly visited.   My favorite places for events are pubs such as the Old Bank of England.  Until 1975 it was a bank and during World War I some of the Crown Jewels and art treasures from the National Gallery were stored in the vaults to protect them from enemy action.   My clients from overseas adore British pubs and they always want a traditional pub experience with beer tasting and fish & chips for dinner.  That makes not only them very happy but me too. And because I love pubs so much, as do millions of other people, I decided to offer a private tour of historic London pubs for small international groups which would be the equivalent of a pub crawl with a friend who just happened to have an encyclopedic knowledge of alcohol, pubs, history and could make them laugh too.   Customers have a great time and often say it was the highlight of their trip so I was very excited when it was awarded the accolade of Top Global Experience.

Right from the beginning my idea for the business was to be a one-stop-shop for drinks related events, education, copy and book writing (I have published nine books, four of them on alcoholic drinks including titles on beer, and gin commissioned by the British Library), broadcasting, and advocating. With School of Booze well established in corporate events, I started training hospitality staff, drinks brands and drinks PR and marketing agencies in drinks knowledge.  When the pandemic started in 2020 this halted all in-person events and training, so instead, I offered them video conferencing and built an e-learning platform selling downloadable courses for beer, cider, and wine.  They are aimed at anyone who wants introductory knowledge about their favorite drink.  For this, I was a finalist in the Pivot category of the Great British Entrepreneur Awards 2021, and in the same year, the School of Booze was named in the Top 100 SMEs in London & South-East England.

A Range of Opportunities

I receive so much enjoyment from my work and am always surprised at the range of opportunities there are for someone with alcoholic drinks knowledge.  Whether that is hosting a successful Guinness World Records bid for the world’s largest beer tasting tutorial, consulting to a global brewer on a new glass design for one of their premium brands (shape and glass thickness has a major impact on how the beer tastes, the drinking experience, and also the perception of the brand), speaking at Harvard Law School about Sherry in the books of author Barbara Pym, acting as an unofficial ambassador for British beer at the British Embassy in Slovenia, being a go-to person on national and local radio stations, appearing on BBC television as a drinks expert, judging the entries at the Japan International Beer Cup, or being a keynote speaker at the Australia Cider Conference, it ensures that no one day is ever the same.  I’m so grateful for this and thankful that my work gives me the chance to meet so many incredible people and have some extraordinary experiences.  So thank you to alcohol for all the chances it has afforded me!

Jane Peyton, founder, and Principal of the School of Booze