Llamas may hold the key to battling COVID-19. -
4475
post-template-default,single,single-post,postid-4475,single-format-standard,bridge-core-2.6.5,qode-news-3.0.2,qode-page-transition-enabled,ajax_fade,page_not_loaded,qode-page-loading-effect-enabled,,qode_grid_1400,footer_responsive_adv,hide_top_bar_on_mobile_header,qode-content-sidebar-responsive,qode-theme-ver-25.0,qode-theme-bridge,qode_header_in_grid,wpb-js-composer js-comp-ver-6.5.0,vc_responsive,elementor-default,elementor-kit-344

Llamas may hold the key to battling COVID-19. 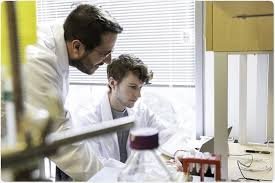 Llamas may hold the key to battling COVID-19.

LLlamas are more than beautiful creatures — they could also help protect humans from COVID-19 and a large array of similar viruses.

Contained in their blood samples are tiny, robust immune particles that could protect against every COVID-19 variant, including Omicron and 18 similar viruses, a team of researchers reported.

The findings suggest that these “super-immunity” molecules, known as nanobodies, could be precursors to a fast-acting, inhaled antiviral treatment or spray. This could potentially be stockpiled and used in the ongoing, evolving pandemic and against future virus spread.

Llamas, along with camels and alpacas, have unique immune systems, the researchers explained. They produce antibodies that have a single polypeptide chain instead of two chains. Therefore, their antibodies are roughly one-tenth the size of typical antibodies, are exceptionally stable, and can firmly bind to viruses.

“Because of their small size and broad neutralizing activities, these camelid nanobodies are likely to be effective against future variants and outbreaks of SARS-like viruses,” said study author Yi Shi, director of the Center of Protein Engineering and Therapeutics at the Icahn School of Medicine at Mount Sinai in New York City.

“Their superior stability, low production costs, and the ability to protect both the upper and lower respiratory tracts against infection mean they could provide a critical therapeutic to complement vaccines and monoclonal antibody drugs if and when a new COVID-19 variant or SARS-CoV-3 emerges,” Shi said in a Mount Sinai news release.

The team researched this theory by immunizing a llama named Wally with the short fragment or spike of the coronavirus that latches onto the protein on the surface of human cells to gain entry and spread infection.

Repeatedly immunizing Wally caused the llama to produce nanobodies that recognized COVID-19 and many other coronaviruses. This gave him super-immunity.

The team was able to isolate and validate a large number of highly potent antiviral nanobodies effective against a broad spectrum of SARS-like viruses.

“We learned that the tiny size of these nanobodies gives them a crucial advantage against a rapidly mutating virus,” said study co-author Ian Wilson, chair of the Department of Integrative Structural and Computational Biology at Scripps Research in La Jolla, Calif.

“Specifically, it allows them to penetrate more of the recesses, nooks, and crannies of the virus surface, and thus bind to multiple regions to prevent the virus from escaping and mutating,” Wilson explained in the release.

With that information in hand, the team designed a highly potent nanobody that can simultaneously bind to two regions of SARS-like viruses, to prevent escape through mutations.

“While more research is needed, we believe that the broad protection, ultra-potent nanobodies we were able to isolate in the lab can be harnessed for use in humans,” said Shi, who conducted most of the research at the University of Pittsburgh before moving his lab to Icahn Mount Sinai.

Past nanobody therapies have been clinically proven as safe and effective in blood clotting disorders and cancer, the researchers noted.