One in four teachers last year had students who never showed up to class: Report -
2877
post-template-default,single,single-post,postid-2877,single-format-standard,bridge-core-2.6.5,qode-news-3.0.2,qode-page-transition-enabled,ajax_fade,page_not_loaded,qode-page-loading-effect-enabled,,qode_grid_1400,footer_responsive_adv,hide_top_bar_on_mobile_header,qode-content-sidebar-responsive,qode-theme-ver-25.0,qode-theme-bridge,qode_header_in_grid,wpb-js-composer js-comp-ver-6.5.0,vc_responsive,elementor-default,elementor-kit-344

One in four teachers last year had students who never showed up to class: Report 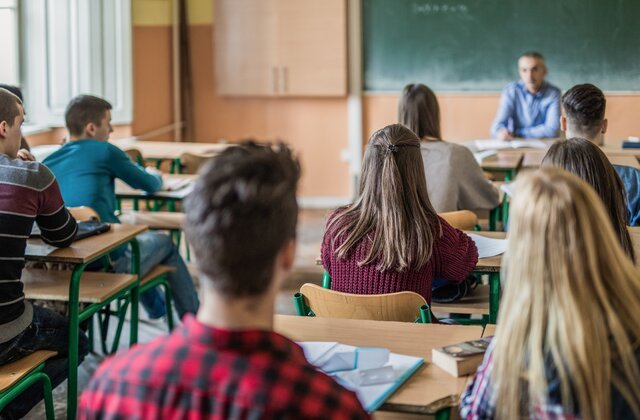 One in four teachers last year had students who never showed up to class: Report

NNearly half of public school teachers in the U.S. reported at least one student during the 2020-21 school year who was enrolled but never showed up for class, according to new federal data that provides one of the first glimpses from the national level of the major challenges that sidelined student learning and the types of schools they left behind.

The report, originally published by the Government Accountability Office last month but updated with new information this week, is part of the federal government’s ongoing efforts to understand how the pandemic affected the country’s public school system. The data was pulled from a nationally representative survey of public school teachers that the GAO contracted Gallup to conduct about their experiences during the 2020-21 school year. High school teachers were the most affected, with roughly two-thirds, or 65%, having at least one student who never showed up, compared to less than half of teachers in kindergarten to grade eight.

While teachers reported a range of obstacles that interfered with their student’s attendance, the challenges mostly fell into two big buckets – limited or no adult assistance or support at home and difficulty learning in or adapting to the virtual environment.

Though data is scarce and patchy due to the varying ways states and districts collect it, education policymakers have been warning that the long-term effect of coronavirus-related disruptions to schools over the last two years on student enrollment and attendance remains to be seen, especially for students who became entirely detached from school. The report marks the first big-picture look at the obstacles that kept students locked out – even those enrolled in schools that provided support, like internet-connected devices and free Wi-Fi – and what it might take to bring them back.

“The high levels of chronic absences means positive conditions for learning are being eroded at a systemic level,” says Hedy Nai-Lin Chang, executive director and vice president of Attendance Works, a nonprofit organization that tracks absenteeism and its effects.

“And the challenges of ensuring the school is a healthy and safe place in light of the last two variants is a huge issue – making sure kids and families have access to health care, making sure that when they get to school that a school is a place where they feel a sense of belonging and support,” she says. “Those are all things that have had real challenges to put in place.”

“These are things that are more than attendance, but when they don’t exist, attendance is affected.”

The GAO report comes at a time when a handful of states and school districts are beginning to report their own chronic absenteeism data – that is, data on students who have missed 10% or more of a school year, or roughly 18 days.

In New York City, the country’s largest school system, 40% of public school students – roughly 375,000 in total – have been chronically absent this year, up from 26% during the 2018-19 school year. And in Los Angeles, the country’s second-largest school district, 46% of students – more than 200,000 in total – have been chronically absent, up from an average of 19% prior to the pandemic.

But the challenges, which have been occurring alongside enrollment drops, aren’t confined to the country’s biggest city school districts.

Chronic absenteeism increased 30% among the 1.4 million students enrolled in New Jersey public schools, according to the annual New Jersey School Performance Reports, released earlier this month. In Camden, one of the last school districts in the state to pivot back to in-person learning full time, five days a week, the number of chronically absent students jumped from 34% during the 2018-19 school year to 57% during the 2020-21 school year.

Nai-Lin Chang is willing to bet that most states and districts are underestimating the actual crisis.

“The problem with the ‘20-21 data is that so much of it was remote and our attendance-taking practices during remote varied hugely and a lot of times we weren’t very stringent,” she says. “So you do see some increases, but my sense is that it’s probably, in most states, much higher.”

“A doubling of chronic absenteeism is not at all uncommon right now,” Nai-Lin Chang says. “The 40% level is not that uncommon, which is incredibly problematic and distressing. And it means that we really are going to have to double down on engagement and support.”

It’s been difficult for policymakers to glean the situation from the national level since the school year is still in progress and data has been difficult to come by. A survey by consulting firm McKinsey & Co. from December 2021 showed that 22% of parents reported that their child had missed at least four days of school at that point in the year – in other words, on track to be considered chronically absent by the end of the school year. That’s a worrying data point since the figure is up from the 18% of families who reported chronic absence last spring. Just 8% of parents said their child was on track to be chronically absent prior to the pandemic.

Researchers at Attendance Works estimated that the high levels of absenteeism reported in the McKinsey survey could translate into an additional 1.7 million to 3.3 million students in grades eight to 12 dropping out of school if historical correlations between chronic absence and high school graduation remain steady.

“The building blocks have been eroded for a lot of kids,” Nai-Lin Chang says. “And we’re going to have to reinvest.”