Various movement patterns can be observed in microrobot collectives 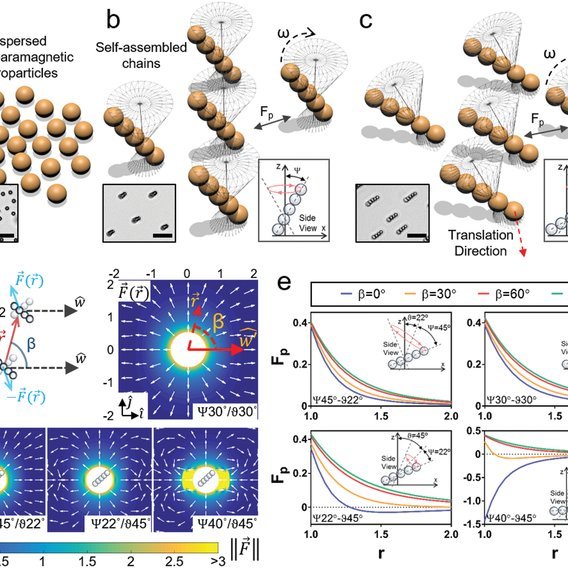 Various movement patterns can be observed in microrobot collectives

Researchers at the Max Planck Institute for Intelligent Systems (MPI-IS), Cornell University, and Shanghai Jiao Tong University have developed collectives of microrobots that can move in any desired formation. The miniature particles are capable of reconfiguring their swarm behavior quickly and robustly. Floating on the surface of the water, the versatile micro-robotic discs can go round in circles, dance the boogie, bunch up into a clump, spread out like gas, or form a straight line like beads on a string.

Each robot is slightly bigger than a hair’s width. They are 3D printed using a polymer and then coated with a thin top layer of cobalt. Thanks to the metal the microrobots become miniature magnets. Meanwhile, wire coils that create a magnetic field when electricity flows through them surround the setup. The magnetic field allows the particles to be precisely steered around a one-centimeter-wide pool of water. When they form a line, for instance, the researchers can move the robots in such a way that they “write” letters in the water. The research project of Gaurav Gardi and Prof. Metin Sitti from MPI-IS, Steven Ceron and Prof. Kirstin Petersen from Cornell University and Prof. Wendong Wang from Shanghai Jiao Tong University titled “Microrobot Collectives with Reconfigurable Morphologies, Behaviors, and Functions” was published in Nature Communications on April 26, 2022.

Collective behavior emerges from the interactions between the robots

Collective behavior and swarm patterns are found everywhere in nature. A flock of birds exhibits swarm behavior, as does a school of fish. Robots can also be programmed to act in swarms — and have been seen doing so quite prominently. A technology company recently presented a drone light show that won the company a Guinness World Record by programming several hundred drones and flying them side-by-side, creating amazing patterns in the night sky. Each drone in this swarm was equipped with computational power steering it in every possible direction. But what if the single particle is so tiny that computation isn’t an option? When a robot is just 300 micrometers wide, one cannot program it with an algorithm.

Three different forces are at play to compensate for the lack of computation. One is the magnetic force. Two magnets with opposite poles attract. Two identical poles repel each other. The second force is the fluid environment; the water around the discs. When particles swim in a swirl of water, they displace the water and affect the other surrounding particles in the system. The speed of the swirl and its magnitude determine how the particles interact. Thirdly, if two particles float next to each other, they tend to drift towards each other: they bend the water surface in such a way that they slowly come together. Scientists and cereal lovers call this the cheerio effect: if you let two cheerios float on milk, they will soon bump into each other. On the flip side, this effect can also cause two things to repel each other (try a hairpin and a cheerio).

The scientists use all three forces to create a coordinated, collective pattern of motion for several dozen microrobots as one system. A video (https://youtu.be/q91AWmTBzG8) shows how the scientists steer the robots through parkour, displaying the formation that best suits the obstacle course, e.g. when they enter a narrow passage, the microrobots line up in a single file and disperse again when they come out. The scientists can also make the robots dance, alone or as pairs. Additionally, they show how they put a tiny plastic ball into the water container and then aggregate the robots into a clump to push the floating ball along. They can place the tiny particles inside two gears and move the particles in a way that causes both gears to rotate. A more ordered pattern is also possible with each particle keeping an identical distance to its neighbor. All these different locomotion modes and formations are achieved through external computation: an algorithm is programmed to create a rotating or oscillating magnetic field that triggers the desired movement and reconfigurability.

“Depending on how we change the magnetic fields, the discs behave in a different way. We are tuning one force and then another until we get the movement we want. If we rotate the magnetic field within the coils too vigorously, the force which is causing the water to move around is too strong and the discs move away from each other. If we rotate too slow, then the cheerio effect which attracts the particles is too strong. We need to find the balance between the three,” Gaurav Gardi explains. He is a Ph.D. student in the Physical Intelligence department at MPI-IS and one of the two lead authors of the publication together with Steven Ceron from Cornell University.

A model for future biomedical and environmental applications

The future scenario for such micro-robotic collectives is to go even smaller. “Our vision is to develop a system that is even tinier, made of particles only one micrometer small. These collectives could potentially go inside the human body and navigate through complex environments to deliver drugs, for instance, to block or unblock passages, or to stimulate a hard-to-reach area,” Gardi says.

“Robot collectives with robust transitions between locomotion behaviors are very rare. However, such versatile systems are advantageous to operate in complex environments. We are very happy we succeeded in developing such a robust and on-demand reconfigurable collective. We see our research as a blueprint for future biomedical applications, minimally invasive treatments, or environmental remediation,” adds Metin Sitti, who leads the Physical Intelligence Department and is a pioneer in the field of small-scale robotics and physical intelligence.