Volvo’s Gift To The World, Modern Seat Belts Have Saved more than 1 Millions Of Lives 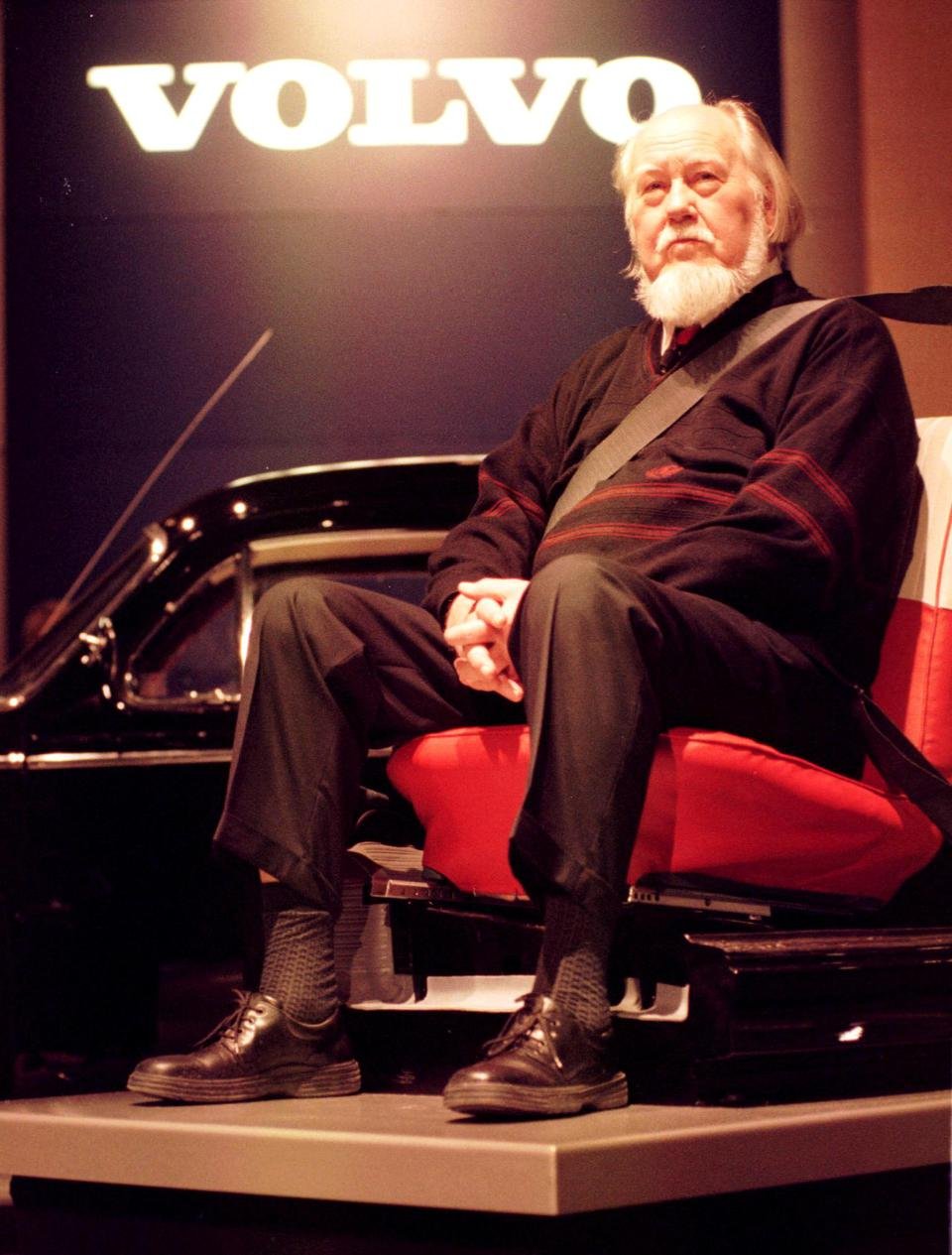 Volvo’s Gift To The World, Modern Seat Belts Have Saved more than 1 Millions Of Lives

olvo proudly proclaim that: “few people have saved as many lives as Nils Bohlin.” And they are right. Nils Bohlin is the little-known Volvo engineer who invented the V-type three-point safety belt in 1959, and saw his innovation through to universal adoption across the motor industry. His new cross-strap design made seat belts much easier to use, and much safer too. It is hard now to imagine cars without them.

2019 is the 60th anniversary of Bohlin’s breakthrough idea, and one worth celebrating. The Swedish company carved out a space in the competitive car industry by making driver and passenger safety a core part of its brand at a time when this was an afterthought for many car makers.

Volvo’s president at the time was Gunnar Engellau, an engineer himself, who had suffered direct personal loss from a road traffic accident. A relative had died, partly because of shortcomings in the two-point belt design—which was not even standard feature in cars at the time. This personal tragedy encouraged Engellau to find a better solution, poaching Nils Bohlin from rival firm Saab, and setting about this problem as a matter of urgency. Volvo would invent a better solution, and be the first car maker to standardise it.

There were two major problems with the historic 2-point belt design, which crosses the lap only. Firstly, the human pelvis is hinged. A single strap doesn’t restrain the torso, leaving passengers vulnerable to severe head, chest and spinal injuries in a collision. Positioned badly, the belt can crush your internal organs on impact. They don’t work very well. Secondly, people don’t want to wear them. Until Bohlin’s commission, mid-century seat belts were clumsy and uncomfortable. If you can’t persuade people to wear a restraint, it turns out that they are useless.

Much credit to Bohlin for making seat belts much more comfortable then, and much easier to use. You could now buckle-up across the chest and waist, using just one hand. This seems simple enough. But even with the new design improvements, it took six years of promotion to persuade a minority of Swedes to use the new design. This was not going to be an overnight success.

Innovations like this can require many millions of dollars in research and development and marketing investment. Of course, Volvo went to great lengths to test the efficacy of this invention in the 1950s and 1960s, running hundreds of experiments, and researching tens of thousands of accidents to verify the efficacy. But giving people scientific data is not enough to persuade them to make a change in their lives. Mass adoption very often requires an emotional (or cultural) paradigm shift.

Seat belt usage in native Sweden did eventually grow; from an astonishingly-low 25% rate in 1965, to over 90% of Swedish car users by 1975. This reminds us that invention and innovation are not the same thing; the latter requires adoption to qualify, making innovation invariably risky. Without Volvo’s persistent leadership, modern seat belts may have taken an extra ten years, or more, to come to market.

Capitalism With A Conscience—Volvo’s Great Act of Generosity

Volvo patented the designs; standard industrial practice, to protect their investment from copy-cats. Good patents offer you a defensible advantage over rivals—twenty years of monopoly rights in the U.S., for example. Having claimed this prize, Volvo were in a position to charge significant license fees to rivals, or indeed, to promote their cars as the safest on the road, by retaining exclusivity.

Remarkably, however, Volvo did neither, but made Bohlin’s patent immediately available to all. Having sponsored the R&D, they gifted their designs to competitors, to encourage mass adoption and to save lives.

If you are not wearing a seat belt, good luck. A scientific study by Bohlin, published in 1967, covered 28,000 road traffic accidents, demonstrating that unbelted occupants sustained fatal injuries throughout the whole speed scale. Amazingly, of the 37,511 people involved in those accidents, no passengers wearing a 3-point seatbelt had died, unless traveling at very high speeds—above 60 mph.

Consider the savings at scale to the insurance industry from this. Tens of billions of insurance losses have been avoided since 1959, from the millions of mitigated injuries and deaths avoided. In turn, this has saved us all on insurance premiums, as car safety has been so dramatically improved.

What about the value of Volvo’s gift to the automobile industry? To understand this, we have to assume a reasonable fee for licensing. For simplicity, and for fun, let’s assume a $10 fee for every car made in 1978—the penultimate year of Volvo’s patent, and its father-figure’s final year in charge.

By 1978, Gunnar Engellau who commissioned this design, had grown Volvo revenues to a record $1 billion. Things were going well. Industry output was at peak too, producing well over 40 million vehicles in the year. Applying a retrospective and hypothetical $10 royalty against 40 million cars could net $400 million in royalties for Volvo. It may well have generated super-normal profits for the company. Or it may have flopped. What we do know for certain, however, is that the company valued passenger safety over potential profits. Bravo to them, for this noble act.

In 2014, Telsa Motors similarly “open sourced” battery patents in a bid to stimulate EV market innovation, betting it would lower production costs overall, and accelerate mass adoption. It is too early to tell if this will have a scalable public benefit to match Volvo’s, but the principle is equally noble.

In 1950, American magazine Popular Science referred to “the death seat,” recognizing road fatalities for front passengers as a national crisis (though not rear passengers so much). Serious design considerations for cars included having all passenger seats face backwards. This was a very well recognized problem, yet it was 9 years following this hysterical article that Volvo’s solution came to market, reflecting an inertia, an indifference even, or maybe just a lack of ideas, among all car makers at the time.

By 1996, 37-years after this invention, 32% of people were still refusing to use seatbelts in the U.S. People can be very resistant to change, it seems, even when it is their best interests. Famously, Princess Diana of Wales was not wearing a seat belt during her fatal car crash in Paris in 1997, which investigators and experts believe would have saved her life. 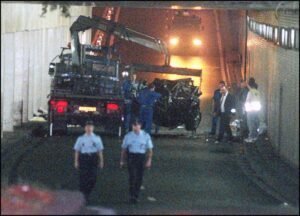 The wreckage of Princess Diana’s car is lifted on a truck 31 August in the Alma tunnel of Paris. (Photo credit should read PIERRE BOUSSEL/AFP/Getty Images)

It was not until December 1984 that New York State adopted a mandatory seat belt law—the first among all 50 states. The devil’s advocate position was that “seat belts would have an adverse effect on fatalities, by encouraging careless driving.” Seatbelts were a new danger! Scientific study eventually disproved this theory, but it must have been a serious consideration for car makers and law makers at the time. Innovation invariably meets well-meaning opposition. In this instance, at least, science eventually prevailed.

Today, Volvo is recognised as the world leader in car safety. Our design hero Bohlin went on to lead new projects at Volvo until the mid-1980s, including the design of SIPS, the famous “Side Impact Protection System.” The company has continued to push technical boundaries, developing airbags and road sensors more recently, which has undoubtedly pressured competitors to innovate in turn.

Through persistence, seatbelt wearing eventually became not just a legal requirement, but a cultural norm; an innovation success, that many owe their lives to. On this 60th anniversary it is worth remembering Bohlin, and Volvo’s gesture of goodwill. It is a refreshing story of design ingenuity, corporate entrepreneurship, and capitalism with a conscience. This doesn’t happen very often. Perhaps most notable of all, is how much time and effort was required for this “no-brainer” innovation to succeed.