here has been a significant evolution in the way in which we save, store and access data. And particularly, the scale with nosql databases shows no signs of stopping expansion. You no longer need to save documents on one particular device. You can access personal files and data from anywhere with a solid Internet service connection, at any time. That’s all because of cloud technology. The cloud storage market spoils you for choice too.

How Does Cloud Storage Work?
Via an Internet service connection, cloud storage works by enabling users access and to download data on any chosen device, such as a laptop, tablet or smartphone. Cloud storage users can also edit documents simultaneously with other users as well, making it easier to work away from the office. Depending on specific needs, prices vary for cloud storage. As an individual user, you can usually get initial amounts of cloud storage for free – such as 5GB with Apple iCloud, which previously dealt with some highly publicized cloud security issues. You have to pay a fee for additional storage. Common price models include monthly or yearly rates, depending on the services you are using.

How Else Does ‘The Cloud’ Make Work Easier?
Other cloud based services include cloud hosting and servers, offered by companies such as Rackspace. You can see PaaS in action with the Fastmetrics cloud phone service, which offers a cloud PBX phone system, hosted securely in the cloud. Another example is this server for free video conference calls, for anyone from anywhere, without the use of software.

How Does Cloud Computing Work?
To understand the workings of a cloud system, it is easier to divide it into two sections: the front end and the back end. They are connected to each other through a network, usually the Internet. The front end is the side of the computer user or client. The back end is ‘the cloud’ section of the system. 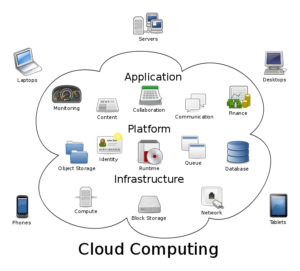 The front end consists of the client’s computer or computer network. Also the application essential to access the cloud system. It is not necessary that all cloud computing systems have the same user interface. On the back end of the cloud technology system, there are various computers, servers and data storage systems that make up the cloud. A cloud computing system could potentially include any computer program, from data processing to video games. Generally, each application will have its own dedicated server.

How Is Cloud Computing Technology Managed?
A central server manages the cloud system. It’s purpose is to manage traffic and client demands to ensure everything runs smoothly. It pursues a set of rules called protocols and uses a special kind of software known as middle ware. Middle ware permits networked computers to communicate with each other.

How Is Cloud Storage Managed & How Do Cloud Service Providers Store So Much Data?
If the cloud service provider or cloud technology company has multiple clients, there’s likely to be a high demand for storage space. It’s possible to ‘fool’ a physical server into thinking that it’s actually multiple servers, each running it’s own independent operating system. This technique is known as server virtualization, which reduces the need for physical machines. This method maximizes the output of individual servers.

So there we have it – a very short look at what cloud computing involves and how database as a service providers works. Also some use cases and risks for this rapidly growing technology, referred to broadly as ‘the cloud’.