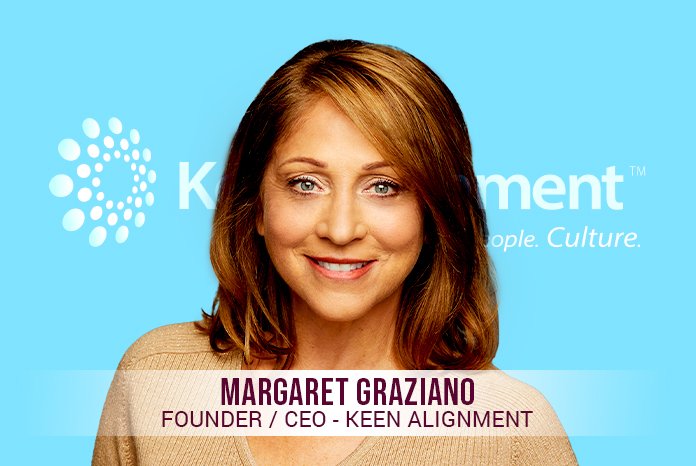 Positioning the right people for the right job for the right reason and the search for perfection has led Margaret Graziano, CEO &  founder of Keen Alignment to breakthrough the work culture and forever liberate the human spirit at work. The curiosity, determination, perseverance, tenacity integrated with compassion helped her to stay successful.

Earlier Margaret had a software company named Keen Hire where she developed a hiring software named KeenHire, after becoming proficient in hiring the right talent. She also developed a system for the entire life cycle examining, how to hire people for values, to train, and to teach.

The emergence of Keen Alignment happened when Margaret was on the verge to lose her software company Keen Hire, her achievements, her intellectual properties to her partner who held higher shareholding in the company. But she confronted and later regained all her contributions in Keen Hire. Since then, they are aligning the mission the vision, and value with a strategy for their clients at Keen Alignment. Developing leadership of the executives, determining organizational goals, and ascertaining the behavioral norms are the guiding principles of Keen Alignment. They make sure all the people and the executive team are operating in sync with each other honoring the core values to understand how it works. Formerly one of the biggest challenges they faced with Keen Alignment was the non-alignment of organizational culture with behavioral norms. And the executive team didn’t want to get responsible for the behavioral norms where no work with them made any difference. Lack of awareness was the next hurdle, as when she developed Keen Hire manually in 2014 only certain people understood it except the big companies. Lastly splitting of the company also ceased her company’s growth.

Currently, Keen Alignment has overcome their past issues and are delivering miraculous changes for different companies. Margaret also gave an insight into how her work has helped a manufacturing company achieve their deadlines which had serious trouble of toxic work culture.  She says the work culture of that manufacturing company was so worse that people even bought guns to work. Margaret approached the issue by first bringing the executive team together for a level set, solving different organizational problems that eventually led to unveiling the reason why it actually happened. They worked with the company for the next two years implementing Keen Alignment’s principle of aligning which helped resolve all the major issues of the manufacturing company. The quality of the product, the finance the sales and the production deadlines were all met resulting in a rise in the profit by 80%.

Manipulative insincerity was one of the biggest barriers she has faced under most male leadership. Being a woman, she was bullied at work for asking challenging things that made her face obnoxious aggression followed by ruinous empathy. Later, she considered Radical Candor as a great model where you care personally and at the same time you challenge directly. She has also faced gender-related barriers in her career, as men prefer to do business with men with who they hang out or golf. Meanwhile, women were struck with household chores and especially working mothers looking after their kids. Gradually she found out away with the help of a group called Vestige. It is a group of young entrepreneurs with young organizations that helped manage her social life. But not prioritizing her insecurities, she chose to grow and gained an understanding of what it means to be a leader.

On a personal note Margaret credit herself for maintaining good mental health by regularly doing yoga, meditating, keeping herself hydrated, and having a gang of good friends that energize her to perform better in every aspect of life.

Conclusively, Margaret advises the next generation of female leaders to make sure that they have a mentor in their industry, someone who is objective and can offer honest feedback.

Click below to know more about her and her Business Achivments :